Get Real Life Style's E-Book Your Work-Week Wardrobe with 10 Powerful Pieces. Subscribe to our newsletter:
Home Blog Shopping Tips The Fashion Show with a “Special” Surprise Inside 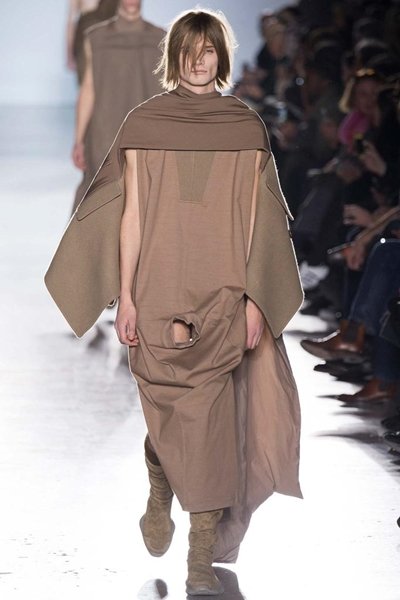 For every one of you reading this who is not a “fashion person”, you will especially love this. Us “fashion people” are used to nudity at the shows. Sheer blouses never have the nude underlayer that a real person would wear underneath them and a nipple sticking out of a low cut evening dress isn’t even much noticed. But there is nudity and there is NUDITY, and Rick Owens most definitely featured the latter at his menswear show in Paris a few weeks ago.

When my friend Rosana sent me an article from Jezebel entitled, “So Much Peen at the Rick Owens Menswear Show,” I had no idea that it would be the humor relief I would need after a long week. Rick Owens sent his male models down the runway with strategically placed cutouts which showcased their you-know-whats. The picture above is the most tame of all the shots as it doesn’t actually show anything. Most of them do but this isn’t that kind of website.

Everyone seemed to have a reaction to Rick Owen’s Fall 2015 runway show. Ken Downing, senior vice president and fashion director at Neiman Marcus, stated, “I’m much like a doctor. When you work in fashion, you see everything. It was just unexpected.” Andrew Keith, president of Lane Crawford and Joyce, said, “I thought it was brave, particularly in a winter season.”

And what did Rick Owens have to say? “We all know that runway looks aren’t meant to be taken literally, they illustrate an ethos. I would like to present a utopian world of grace free of fear and shame,” he noted. Yeah, ok. He also got a lot of press, didn’t he?