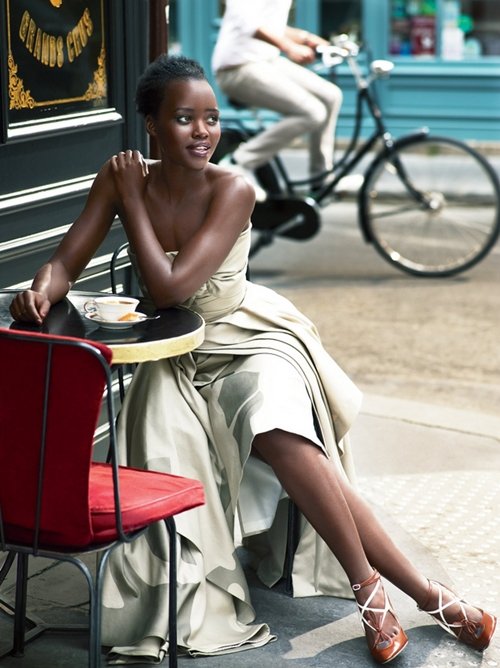 I have two celebrity style icons that, in my opinion, can do no wrong. These are two women that are constantly taking risks and breaking the rules, never afraid to stand out. One is Olivia Palermo, who we’ll come back to another time, and the other is Lupita Nyong’o. Besides the fact that the Kenyan actress has flawless skin, as proven by her recent role as a Lancome ambassador, and perfectly toned arms and legs, there is something about her that just glows in photographs. Her smile is absolutely infectious. Here are my five reasons why Lupita is my ultimate style icon.

1. She can pull off any fashion look, from an innocent twirling skirt to a dramatic cape. 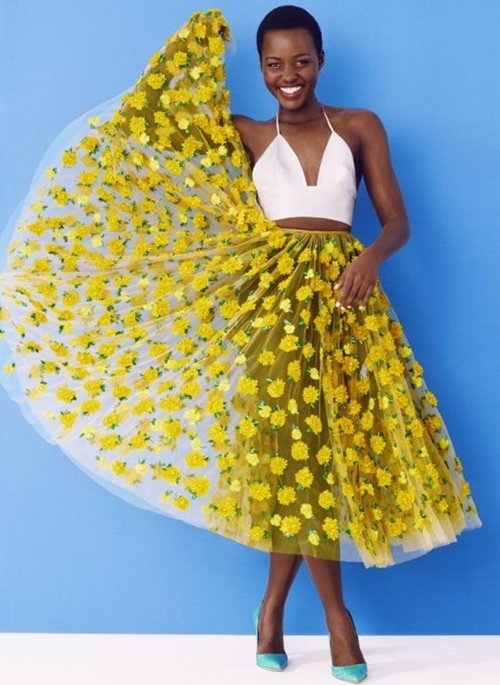 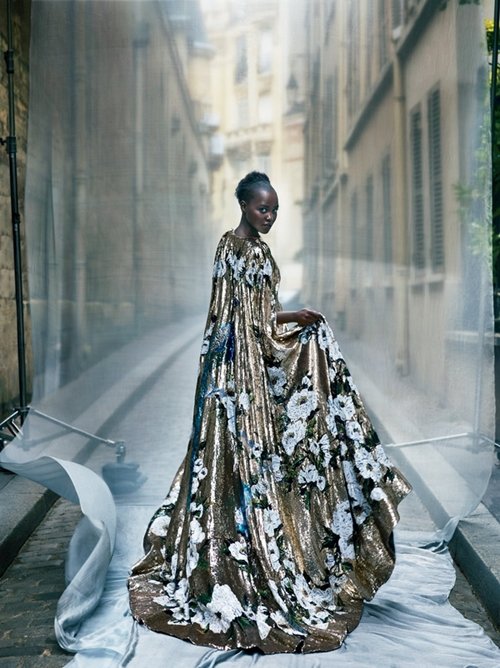 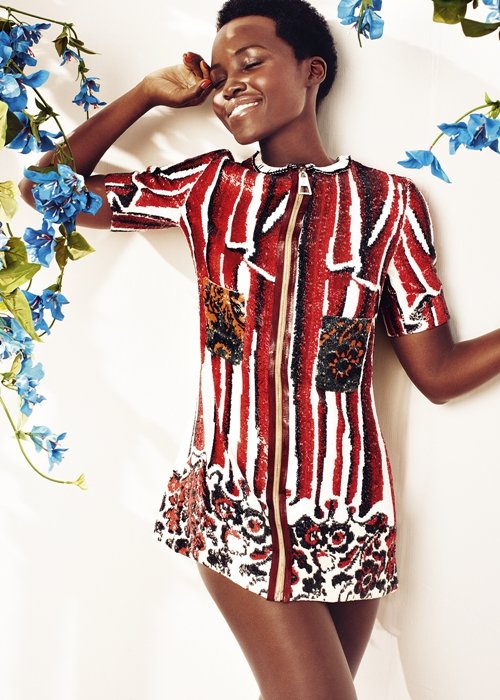 Since she won the oscar for her breakout role in 12 Years A Slave two years ago, she’s been on countless magazine covers (including Vogue twice). The way she seamlessly transitions from the girl next door to full-on fairy tale princess is no easy feat. Keep in mind, 12 Years has been her only major movie role, besides Star Wars in which she plays a character composed entirely of CGI. It is simply her radiance that has the fashion world totally enamoured over her. 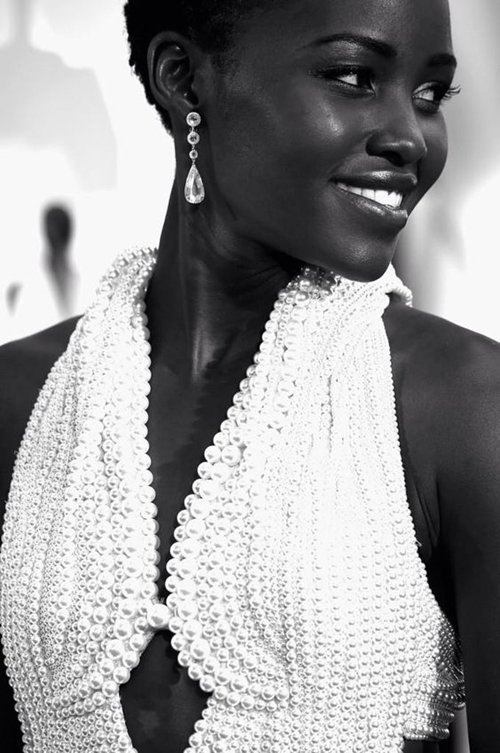 Wearing Calvin Klein at the 2015 Oscars 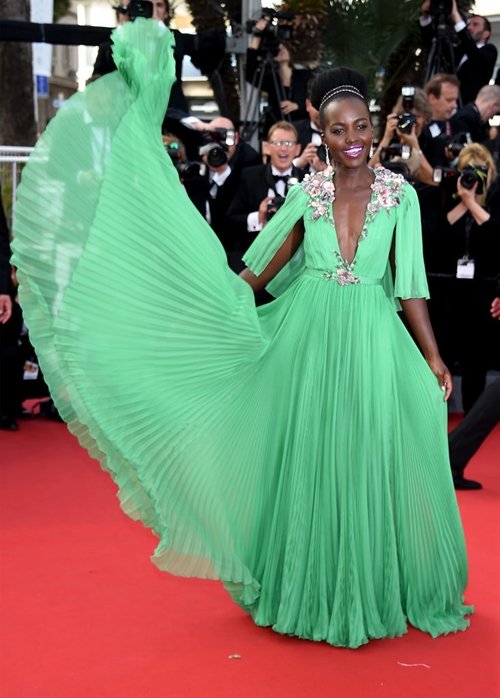 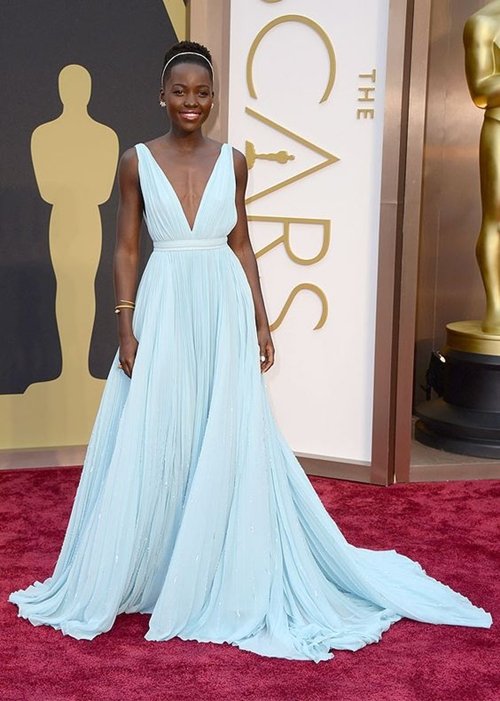 Wearing Prada at the 2014 Oscars

I have to admit, it was difficult to limit my favorite red carpet outfits to only three dresses. When she showed up to the 2014 Oscars in her princess blue Prada dress, I think everyone just melted. And somehow they melted again at Cannes and again at the 2015 Oscars. I look forward to what she wears during awards season because it’s always different from the boring sea of Versace and Tom Ford skin-tight silhouettes.

3. Lupita loves lip color as much as I do. 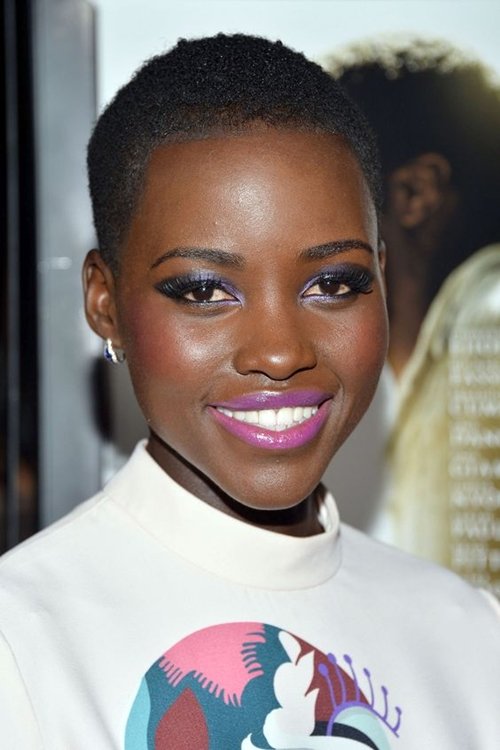 At the LA premiere of 12 Years A Slave 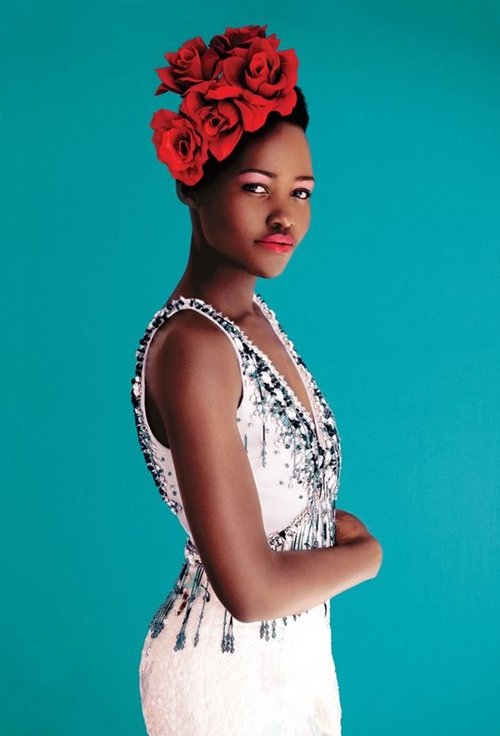 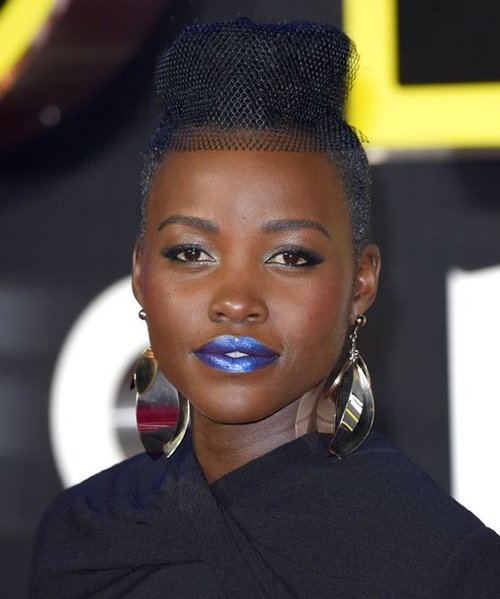 At the Star Wars: The Force Awakens red carpet premiere

Is it just me, or does anybody else want to run out and buy metallic blue lipstick after seeing Lupita kill this look? Blue lipstick and big structural earrings complete this look for the Star Wars: The Force Awakens red carpet. Lupita is so great at using lipstick to accentuate her outfits, that multiple blogs, such as Huffington Post and Fashion & Style have rated her top lipstick moments.

4. Even with all of her daring outfits, she never pairs an expected or boring shoe. 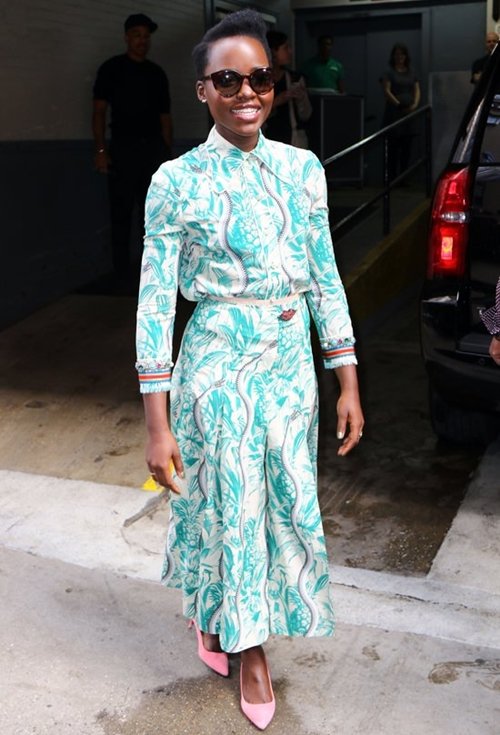 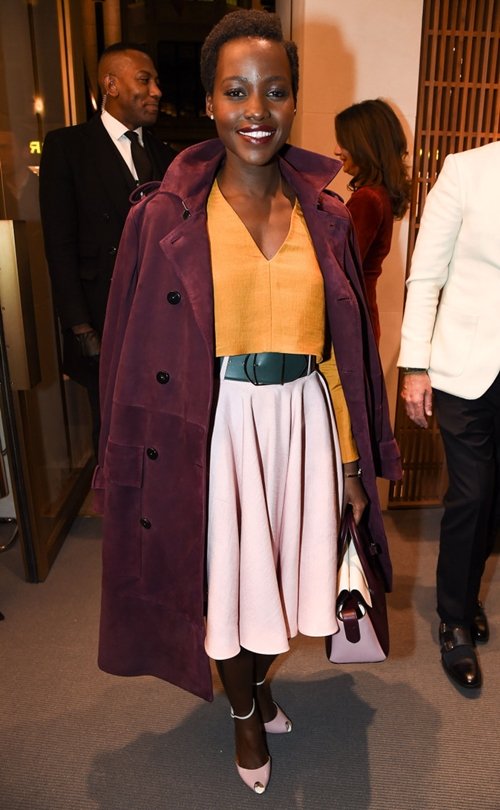 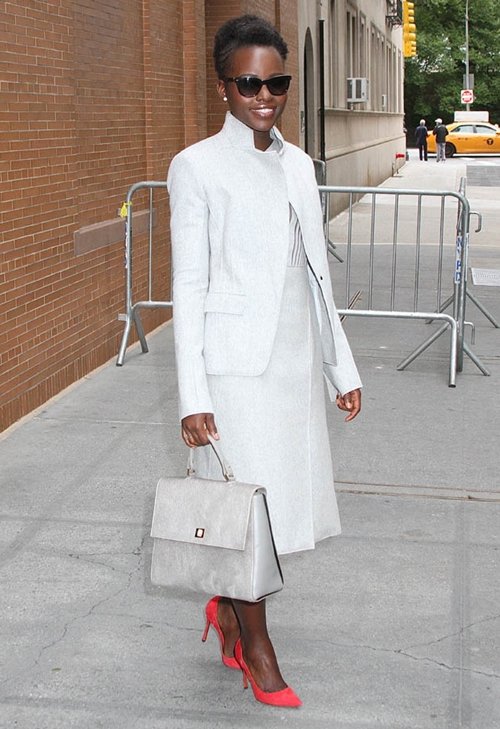 After her appearance on The View

Basic black pumps? Not for Lupita. Some fashion know-it-alls think that Lupita overdid it with the bubblegum pink pumps with the Gucci outfit, but I disagree. For someone who looks as good in color as her, she can pull off whatever color shoes she wants.

PS. Can we talk about her colorblocked look for Bally? The orange, pale pink, burgundy, and hunter green work together so harmoniously. This is my summer palette inspiration. 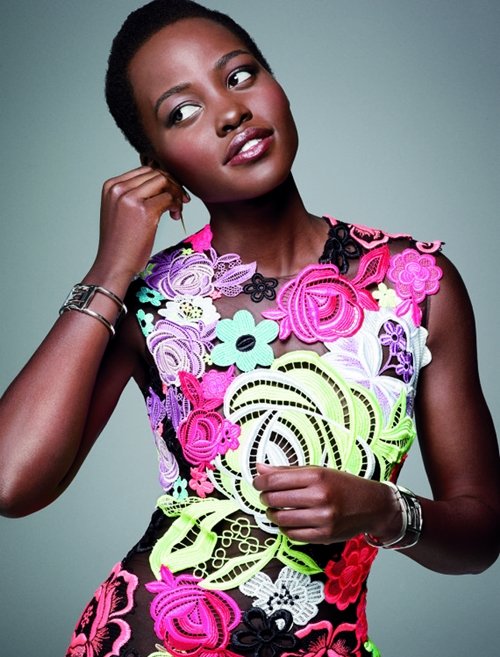 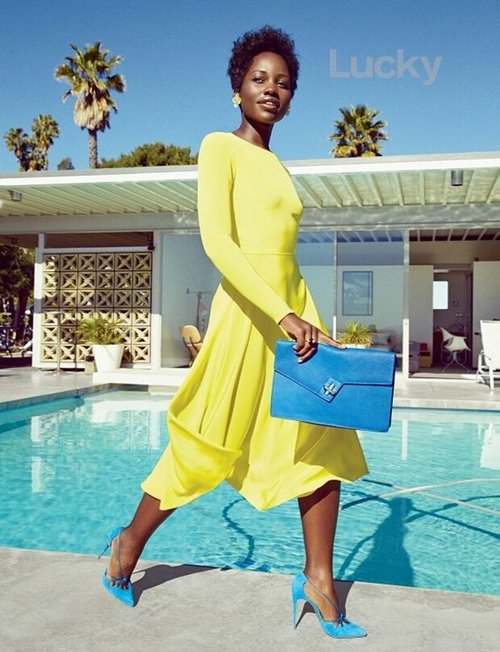 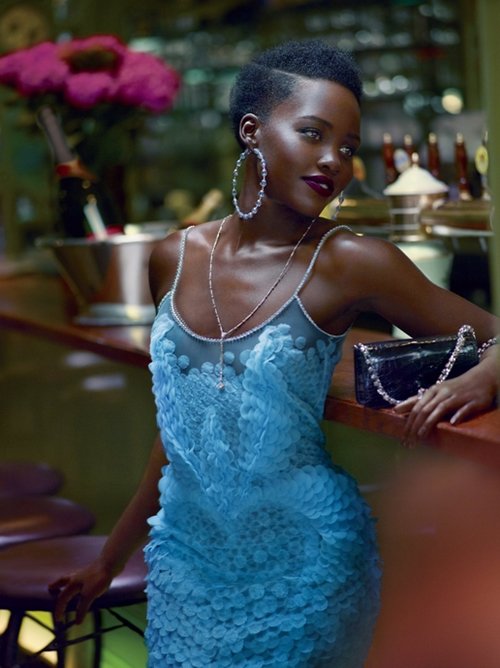 What I love, and most everyone loves, most about each of her magazine photoshoots and red carpet moments is the color range. From ruby red to pastel blue to citron yellow, Lupita looks undeniably amazing in bright and bold colors. She knows what colors look best (or at least her stylist knows) and she doesn’t stray too far away from those shades. As summer is finally about to grace us with its presence, I think Lupita’s style should inspire us to shed the black and grey tones that are so popular in the wintertime and find the colors that make us glow.

I’m not saying everyone needs to go out and fill their wardrobe with chartreuse. The point is to take risks and go bold. And if you ever feel like you’re not wearing the color but the color is wearing you, take a page from Lupita’s book and add bright lipstick and/or blush to draw the attention to your face. 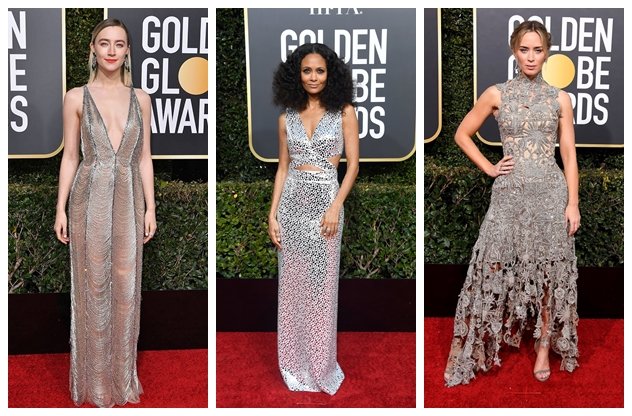